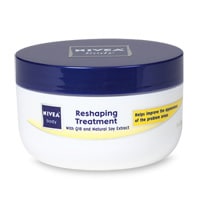 Nivea Body Reshaping Treatment is an anti-cellulite cream that aides to help reduce the look of cellulite that affects women. Cellulite is a skin condition that usually shows up in problem areas of women such as thighs, hips, bottom and the stomach. The skin has a dimpled look to it and often times it looks like

cottage cheese. The dimpling of the skin is usually a result of skin cells losing their strength and elasticity.  The Nivea Reshaping Treatment will help appearce of this condition by firming and toning the skin.
The Nivea Reshaping Treatment in its ingredients contain two very powerful natural anti-aging ingredients that help to enrich and nourish the skin. These two ingredients are Q10 and an active soy protein. Q10 is a coenzyme produced by the skin and it helps to provide the skin with firmness and a nice tone. The level of Q10 diminishes over time and Nivea Body Reshaping Treatment helps to replenish the loss of the coenzyme over time. The soy protein is an extract from the natural soy plant and this once again helps to tighten, firm and tone the skin.
For best results the the Nivea Reshaping Treatment should be used over a period of 8 weeks. Women have claimed to see results after 2 weeks. This could include firmer skin, improved skin elasticity and a softer, smoother skin texture. After 4 weeks of use there is a reduction of the look of cellulite on the skin.  You can begin to see a noticeable difference of the skins surface, a more sculpted, defined and contoured look of the skin.
The Nivea Reshaping Treatment is not a magic cream and the manufacturers claim it will not cure cellulite. It will reduce the look of cellulite on the skin which will make women across the globe happy for the benefits the cream does provide. 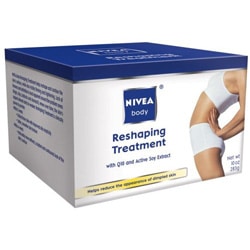 Many women have expressed mixed results for the Nivea Reshaping Treatment. There are some who claim they see results and others who admit that the cream was worthless and did nothing to reduce cellulite on their body. We will examine the two groups and see who had something positive and something negative to say about the cream.
Positive: Many women admit after using the cream that their skin tone is much firmer and skin texture is silky smooth and soft.
even my 10-year-old stretch marks are seemingly disappearing. The fragrance is very light and the formula is not sticky at all.

Negative: Women who used the Nivea Reshaping Treatment complained that the smell of the cream was overwhelming and often smelled like chemicals.  There is also a sticky and slippery feel to the skin after application of the cream. The women also stated that they experienced little to no effect as it related to the cream removing or reducing the site of cellulite.

For best results it is advisable to use the Nivea Reshaping Treatment at least one time per day. The cream should be applied to the areas that have been affected by cellulite and other areas that you want firmed and smoothed.
It is best to apply the cream to the affected regions in a circular motion. This will help improve micro-circulation and help maximize the effect the cream has on the skin. This should be done over a period of 8 weeks. It is also recommended that you should use the NIVEA skin firming moisturizer along with the cream to get the best result.
Nivea Reshaping Treatment Ingredients